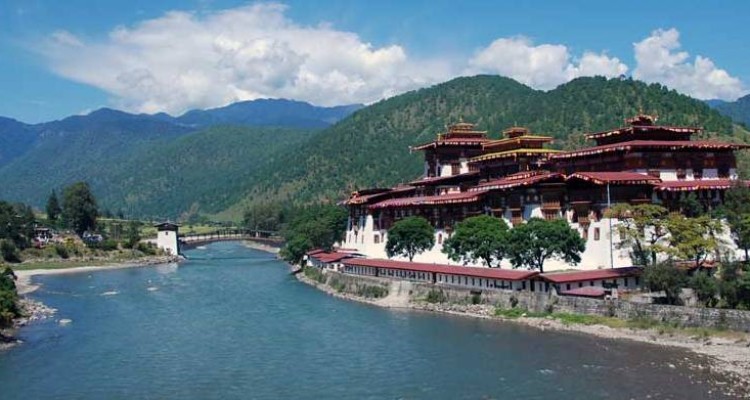 Bhutan is a small country town, located in the eastern Himalayas. It is referred to as the last Shangri-La. At the same time, it is one of the global tourism hotspots by its traditional and progressive characteristics. Yet, at the same operating under the High Quality, Low Volume Tourism Policy set by the Government of Bhutan. It is not widely known that Bhutan is the last Himalayan Kingdom. This small country is situated in the nooks and crannies of the highest mountain range on earth. Until the 1960s this special place did not have any paved roads and was inaccessible for foreign truism until the 1970s. It was the last country in the world to receive television in 1999. The scenery, as well as Bhutan’s location, is hard to capture in words, but breath-taking, spectacular and magnificent does almost come close.

The kingdom of Bhutan lists environmental protection as one of the four pillars of happiness. A state of mind, which the country takes so seriously that gross national happiness is considered greater than the gross domestic product. This principle is a radical approach to development. It means that the Bhutanese uphold the integrity of traditional values in social, religious, cultural, and environmental realms. At the same time, there is a significant push towards a modern economy. Our country’s philosophy is a unifying national concept which means human values come before commercialism.

Even though Bhutan was hidden away for centuries of isolation it is now evolving into a modern age country. It preserves its vibrant and traditional culture and its rich, and largely still intact environment. This gave Bhutan worldwide the reputation of the most authentic holiday destination. Cultural philosophy is hold up highly in Bhutan. This means among others: dress codes, great festivals, traditional sports, and other indigenous practices which make Bhutan one of its kind. A holiday destination like no other in the world of tourism.

If you are one of those travelers who love going shopping and bringing home gifts, Bhutan is the place for you. The majority of items to buy are textiles. For example, hand-woven fabrics made from raw silk or silk, carved masks of several animals, woven baskets made of cane and bamboo, and wooden bowls are known as Dapas. However, you can also purchase handmade paper products or finely crafted gods made of silver. Other shopping opportunities are thangka paintings and Bhutan’s exquisite postage stamps. You can find those items in the many handicraft shops in and around Thimphu as well as in major towns. Please remember that buying and selling of antiques are prohibited in Bhutan. Please remember that the profit of all of your shopping has a direct benefit to the local people.

Tipping or not to tip? This is a very personal decision. However, we do not have a tradition of tipping. While the decision is always up to you, please remember, Bhutan’s economy rests on tourism. That is, every dollar you spend benefits the local community and helps to rebuild the country after the big earthquake.

Bhutan’s national language is Dzongkha. Among several other languages, English is the main language and is spoken by most Bhutanese. Communicating directly with the native people will help you to increase your knowledge as well as understanding life in Bhutan.

Clothes and other paraphernalia:

The weather in Bhutan can be quite erratic, in particular with increased altitude. Please be prepared to embrace whatever weather the mountain ranges serve up on any given day! Our guests are expected to dress modestly and respectfully at all times, and, in particular when visiting monasteries, Dzongs, and other religious institutions. You express your respect and politeness when removing hats and caps when entering one of the following: religious and administrative premises, facilities, and any other place where the national flag is raised.

Our standard time is 6 hours ahead of the GMT, and there is only one time zone throughout the entire country.

Office hours in Bhutan are divided into winter and summer opening times.

Beginning of March till the end of October, opening times: 9 am – 5 pm.

Beginning of November till the end of February, opening times: 9 am – 4 pm.

However, summer and winter times are only observed in Thimphu and a few other surrounding districts. Also please note, those times are only followed by Civil Servants who work under the Royal Civil Service Commission. Co-operations and private organizations usually do not observe summer and wintertime opening times. They are open from 9 am – 5 pm irrespectively of the season.

Bhutan’s main water source comes from the mountains. Therefore, the drinking water is mostly untreated. We advise, that you always boil water for consumption. However, in most towns, there is treated as well as bottled water available at reasonable costs.

Traditional Bhutan food is rich, spicy, and with a lot of cheese and chili. It is advisable that visitors stick to the Chinese, Continental or Indian cuisine that is served in most restaurants. There is also a choice between vegetarian and non-veg food. Dishes, definitely worth trying are: Momos – the Tibetan dumplings and a more local, yet, the daring dish is the Ema Datshi; a traditional Bhutan dish.

Bhutan has a highly invested team of guides and interpreters. Every single one of them is very well versed in history and possesses excellent communication skills. All guides and interpreters are certified and are professionally trained by the Tourism Council of Bhutan. Some of them are even fluent in Japanese, Thai, and other European languages.

Nepal has a range of public holidays that are administrated by the government and are observed throughout the region. Dzongkhag, however, has its own public holidays, which is celebrated during the annual tschechus (Religious festivals). If you wish to learn more about those holidays, please contact your service provider or travel agent.

Bhutan may well be one of the best examples of sustainable eco-tourism, and we are absolutely committed to this concept. This notion of eco-tourism is based on the Buddhist philosophy that everything is interconnected. Therefore, there is also interdependence between people and nature. All our operations are based on the unique developmental philosophy of Gross National Happiness. This means we ask all travelers to be aware and sensitive to all social, cultural, and environmental systems. At all times, we do our best to preserve national traditions in a rapidly changing world. The Government of Bhutan is unwavering in safeguarding its heritage to ensure that the local people maintain their dignity against the onslaught of globalization and modernization.

As mystical as its name may sound, the Land of the Thunder Dragon is not a museum; it is an existing culture and possibly one of the last living examples of a vibrant Himalayan society. Despite tourism as the primary source of income for Bhutan to guarantee free education and health services, Bhutan sees no need to submit to the over-commercialization, not even in the field of tourism. As a small country e acknowledge that we are just emerging from centuries of isolation. We have to do this in our own time and pace. It is just now that a modern economy is gently introduced to a mostly rural country. Still, the majority of people make a living off the land. Therefore, we adhere to our policy of high-value, low-volume tourism while at the same time sharing our exquisite culture with the world. In the fast-paced world of today, Bhutan is an anachronistic country, yet, we like to learn from our visitors.

Bhutan opened up to tourism in 1974, and the Government adopted a cautious tourism policy from the beginning to avoid the adverse impacts that mass tourism could have on a small country. Visitors pay a minimum fee of US $ 250.00 per night. This is an all-inclusive payment for accommodation, meals, guides, government taxes, transportation within Bhutan, including entry fees for monuments and museums. This exclusive policy was Bhutan’s representation of eco- tourism. The government has long lived up to its vision of sustainable living within its Gross National Happiness Policy while paving the way for development. Mountaineering is closed, no matter how many eager climbers are waiting to conquer the 20 virgin peaks within Bhutan. 70% of the country is still covered with forest and Bhutan is more than willing to preserve this natural reservoir for generations to come.

Tourism is one of the largest income generators of foreign exchange for the country’s small economy. The Tourism Council of Bhutan knows that its policy of high value, low volume is the right policy because Bhutan is just too small for mass tourism. Travelers from Bhutan report back that their stay in the Land of the Thunder Dragon left them with the feeling of having visited a very special place. Way off their everyday lives, the hustle and bustle, and high paced living away from the modern world. While Bhutan might not be rich in material possessions, it is the society that still holds everything, which is good and sustainable for communities. It truly makes a difference to one’s living, away from the global rat race. While Bhutan has made the step into the 21 century, its heritage, its spirit, and culture is still alive as it was before Bhutan’s opening to the world more than 40 years ago.

Before Bhutan opened up to the world, in the early 1960’s it was completely cut off from the rest of the world. Until its planned economic development was underway, Bhutan was only accessible by foot. One entry point was from Tibet over the high passes in the north and in the south through the plains of Assam and West Bengal. In time and with ongoing development the access became easier as roads connected Bhutan with other parts of the country.

Today there are three entry points to Bhutan:

Currently, the country has only one airport, which caters for all the in-and outgoing air traffic. However, there is an international airport in the planning which will give visitors another choice on how to travel to Bhutan.

The only national airport is located in Paro, 7300ft above sea level. The airport is surrounded by mountains as high as 16,000 ft. Druk Air brings you to and from destinations such as Bangkok, Delhi, Kolkata, Bodh Gaya, Dacca, Kathmandu, and Guwahati.

Flying from Paro to Kathmandu offers you the most exquisite scenery. Overflying 4 – 5 of the highest mountains in the world, by clear weather you will see Mt. Everest, Lhotse, Makalu, and Kangchenjunga. A display you will remember a long time to come.

If you travel on land, you will pass through Phuntsholing, Gelephu, and Samdrup Jongkar, the only for tourists open land border at the east of Bhutan.

Phuntsholing, located approximately 170km east of Indian’s national airport Bagdogra – from where your trip will begin with the car and take you through an exciting climb up to Thimphu, the capital city. Even this is only a 176km trip, the street is steep and windy, and it can take you up to 6 hours to get to the capital.

Gelephu in South-Central Bhutan is another entry point to Bhutan and about 250km from Thimphu. Traveling this way, you will encounter the tropical areas of Bhutan at the beginning. Closer to Thimphu you also will encounter the alpine region. Travel time is about 10hrs.

Samdrup Jongkhar is the only entry point in eastern Bhutan. The town border in the Indian district of Darranga, Assam, and is approximately 150 km away from Guwahati, the capital city of Assam. The journey from Guwahati is about three hours.

Tourists entering Bhutan through Samdrup Jongkhar will travel through Trashigang, the largest District in the country. From there it will take you over the lateral route to Mongar, Bumthang, Trongsa, Wangde Phodrang, and then finally to the capital, Thimphu. The distance is about 700 km. You need to give it about three days to complete this trip.