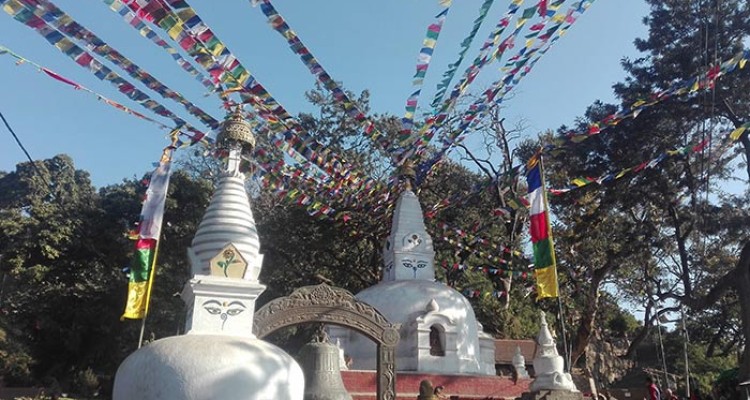 Kathmandu day tour offers so many things that other city of Nepal as it is a popular place for architect, History, and Culture. There are many things to explore during your sightseeing trip either you wanting to explore the city yourself or through travel Agency on a package.

Kathmandu valley is quite big and it has 3 different District but they are all in the valley.  There so many popular temples, Stupas, Monastery and local market area to explore but mainly Kathmandu Durbar Square, Bhaktapur Durbar square , Buddha Stupa, Swaymbunath (Monkey Temple), Pashupatinath Hindu temple( cremation place) are more attractive for visitor where you get to see the local Culture, traditions, cremation ceremony, Buddhism and many other activities around the city.

The Kathmandu day tour takes about 3 hours if you are doing a half day tour That means you can choose 3 major places to visit I valley and if you are planning your full day tour around the city that means you will visit 5 major places. Your full day sightseeing will take a bit long but you will have so many different knowledge. Full day sightseeing tour in Kathmandu starts in the morning after your breakfast till evening.

There are so many links and Web Pages to meet many different Guides who will provide you much information during your day tour around Kathmandu if you just go in Google and search freelance guide in Nepal than you will find many links and lots of choices.

Tour Guides are welted and educated who can fully explain the world heritage sites, history & much extra knowledge.

The Most popular places for sightseeing very quick

There are many travel info and travel guides include few popular places  Kathmandu but they are not all to explore around Kathmandu valley, but mainly Kathmandu Durbar square, Pashupatinath temple, Swambhunath Stupa, Bauddhanath Stupa, is the popular day trip destination, However, there are other many beautiful historical places to visit.

Furthermore, let’s have a look Kathmandu day tour one by one what is in it.

Kathmandu day tour within Kathmandu Valley with adjoining cities of beautiful Patan Durbar Square in Lalitpur know as the “city of arts” is another wonder of Nepalese craftsmanship since early 6-7th Century and still retains its beautiful glory, after an interesting Kathmandu historical and cultural tour, Patan is well worth a visit just a mere distance south from Kathmandu city. 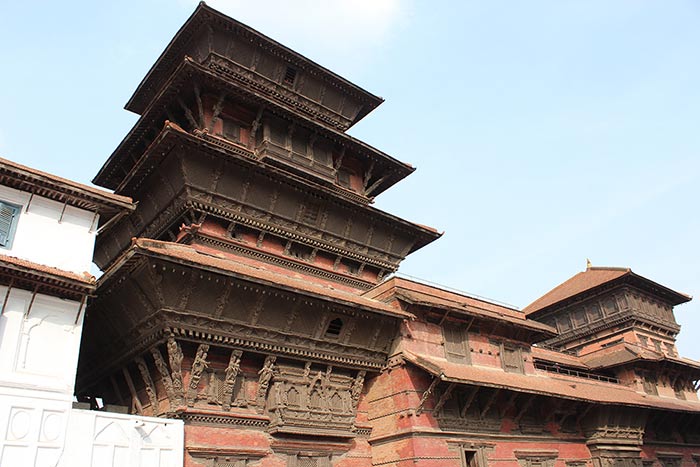 The ancient name of Patan is Lalitpur, meaning city of beauty. It is indeed a city of beauty and grace and is planned on a circular format with Buddhist stupa at each of the four points of the compass. The city is three kilometers south-east of Kathmandu across the southern bank of the river Bagmati. Like Kathmandu, its most photogenic center of attraction is its Durbar Square complex, situated right in the middle of the marketplace. The city is full of Buddhist monuments and Hindu temples, with fine bronze gateways, guardian deities also and wonderful carvings. Noted for its craftsmen and metal workers, it is also known as the city of artists. The city is believed to have been built during the reign of Vira Deva in 299 A.D. Some of Patan’s more important monuments are as follows:

kathmandu day tour with adjoining cities of beautiful medieval city of Bhaktapur / Bhadgaon know as the “city of devotees” is another wonder of Nepalese craftsmanship since early 6-7th Centaury and still retains its beautiful glory, after an interesting Kathmandu & Patan historical and cultural tour, Bhaktapur is well worth a visit just a mere distance east from Kathmandu city.

Bhaktapur or Bhadgaon “The city of Devotees” 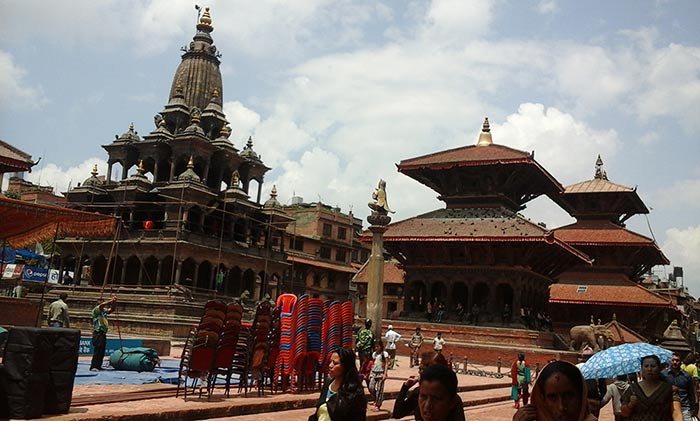 Bhaktapur is the third largest city in the Kathmandu valley. The city was once the capital of Nepal during the great Malla Kingdom from the 12th to the 15th century. Foursquare miles of land situated at an altitude of 1,401 meters from sea-level is a home to Traditional art and architecture, pottery and weaving industries, rich local customs and culture, and the every-day life of Bhaktapur people. All that and more will have you visit this untouched ancient city more than once! Nepal’s Malla dynasty’s achievements in arts and crafts are reflected throughout the Bhaktapur city. Bhaktapur is also known by woodcarving artists, for its cap known as Bhadgaon Topi, and for its curd known by Nepalese as the `Bhaktapur ko Dahe’ (meaning Curd made in Bhaktapur). Tourists visiting the city also take the time to relax and observe other interesting happenings in the city such as children’s playing outside their home and in temple yards, busy and color-full open markets, women’s making clay-pots, weaving, and sun-drying crops and vegetable products. Bhaktapur is located at 14 km east of Kathmandu.

Places to visit in Bhaktapur:

The ancient temple of Changu Narayan is located on a high hilltop that is also known as Changu or Dolagiri. The temple is surrounded by forest with a champak tree and a small village, known as Changu Village. The temple is located in Changunararyan VDC of Bhaktapur District, Nepal. This hill is about 8 miles east of Kathmandu and a few miles north of Bhaktapur. The Manahara River flows beside the hill. This shrine is dedicated to Lord Visnu and held in especial reverence by the Hindu people. This temple is considered as the oldest temple in Nepal.  The pagoda style temple has several masterpieces of 5th and 12th-century Nepalese art. According to legends Changu Narayan temple existed as early as 325 A.D. in the time of King Licchavi King Hari Datta Verma and it is one of Nepal’s richest structures historically as well as artistically. In the grounds there is a stone pillar inscription of great importance recording the military exploits of King Man Dave who reigned from 496 A.D. to 524 A.D. The first epigraph evidence of Nepalese history found in the temple premises during the reign of the Licchavi King Mandeva dating back to 464 A.D. shows that Chang had already been established as a sacred site in the 3rd century A.D. It is the earliest inscription known in Nepal. The temple was restored during the lifetime of Ganga Rani, consort of Siva Simha Malla who reigned from 1585 to 1614. There are records of the temple burning in the year of 822 Nepal Samvat (1702 A.D.), after which reconstruction was carried out. More inscriptions in gilt-copper plates were added by Bhaskara Malla in 1708 A.D. 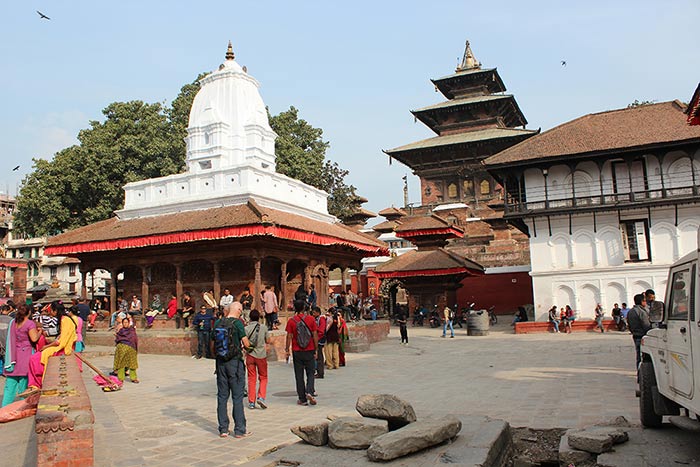 Kathmandu Durbar Square is one of the popular places for travelers and local both as it is a small area where you get to see the very old architect from 14th Century, god & Goddess temple and local market area. It is a short and easy walk from Thamel only takes about 10 minutes to the south of Thamel via Chhatrapati Chok. The Basantapur Temple and kumara Ghar are the major attractions and have very unique History. It is a part of your around Kathmandu 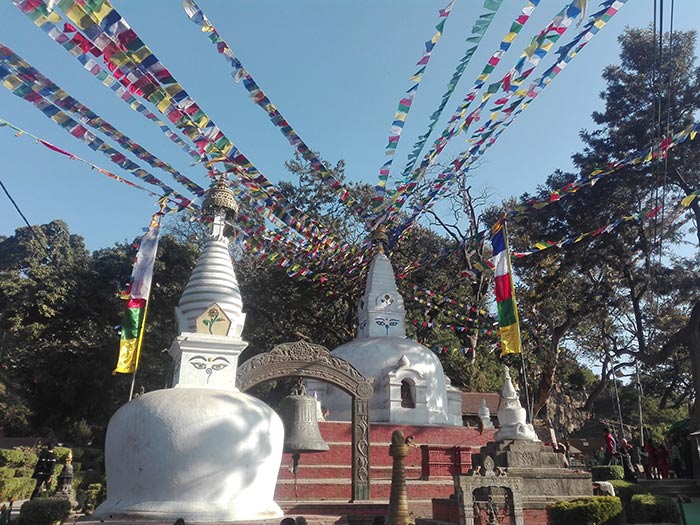 Swayambhunath Stupa is one of the most popular places near Thamel. It is also known as a monkey temple. It is very old Buddhist and Hindu’s historical place that overlooks the entire Kathmandu valley and green rolling hills. It is located to the small mountain and surrounded by many Temples, Shrines & So many small red monkeys.

Swambhunath is also a part of a full day tour and half day as it is in the middle of the city and closes from Thamel (Touristic area). Either you go by foot that is both possible and easy excess to visit so if you go by taxi from Thamel to monkey temple it takes only 15 Minute & By foot about 35 minutes.

On the top of Swambhunath, there are so many interesting shrines, Buddies prayer Flags, Temple, Stupa and Monastery as well as the mass of red small monkeys. According the history books Swayambhunath was a small island before Monjushree born (Hindu Goddess) than after when she saw the massif lake in Kathmandu valley she decided to pass the water from the valley by her spiritual sword than she succeeded too, so by that time this place was island of the valley and when Buddha died a piece of his bone buried under the Stupa which is cleanly seen nowadays so people believe that there is a Spiritual power & belief because of that history.

Kathmandu day tour around the valley can be extended as there are so many other hidden popular places. Kathmandu city is also known as a city of the Temple so there are hundreds of temple, monastery, Stupa and other attractions so you can explore the city as per your time and budget if you are interested to explore the history and culture of Nepal and Nepali people.